Shocking video has emerged of the moment a man is knocked out with a single punch by a security guard in Asda.

Footage shows a grey hooded man approaching the guard, who has ‘security’ written on the back of his jumper, at the entrance to the Asda store.

The store is in the town of Shoeburyness, near Southend-on-Sea, in Essex.

As the man in grey approaches, the man wearing a black jumper unleashes a right-handed jab, catching him in the face.

Instantly stunned, he falls to the floor as his knees buckle underneath him. The knocked-out man is then dragged by the hoodie and thrown outside the shop.

A second reel of CCTV footage shows the outside view of the shop as the man is being dragged out.

As he is thrown outside the shop, his head bounces off the concrete floor and the man in the black walks back inside.

Still dazed by the punch, the man struggles to stand up as he stumbles multiple times and falls on his face.

Blood can be seen in the video dripping down onto the concrete floor as the man attempts to leave the area.

A man in a blue shirt hands him his phone which he is not able to hold on to so is left next to him.

Moments later an onlooker in a black jacket then helps the man to his feet, though he still struggles to keep his balance.

The man then can be seen at the end of the footage swaying from side to side as he walks off. 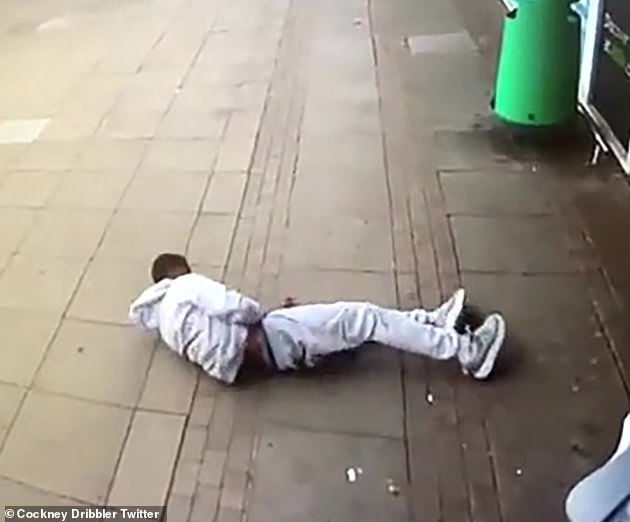 Still dazed by the punch, the man struggles to stand up as he stumbles multiple times and falls on his face 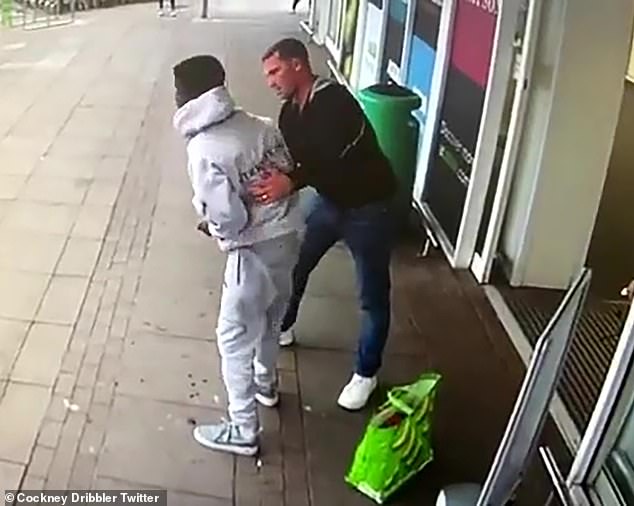 Moments later an onlooker in a black jacket then helps the man to his feet, though he still struggles to keep his balance

An Asda spokesperson told MailOnline: ‘We do not tolerate violence in our stores and are investigating the incident in our Shoeburyness store as well as supporting the police fully with their enquiries.

‘As this is an ongoing police investigation we cannot provide any further comment at this time.’

An Essex Police spokesperson told MailOnline: ‘We are investigating following an incident in Shoeburyness.

‘We were called to the Asda store in North Shoebury Road to reports of a disturbance where a man in his 20s was assaulted.