Shocking dashcam footage shows a panicked motorist speed off in terror after being viciously punched through their car window by a pedestrian.

The man launched his attack after the driver was forced into an emergency stop to avoid hitting the man in Wallasey, Merseyside.

The pedestrian is then seen sprinting after the vehicle, trying to pull the driver’s door open, and throwing a punch through the open window.

Desperate to escape, the driver pulls out of a line of traffic and speeds down the wrong side of the road and across a roundabout. 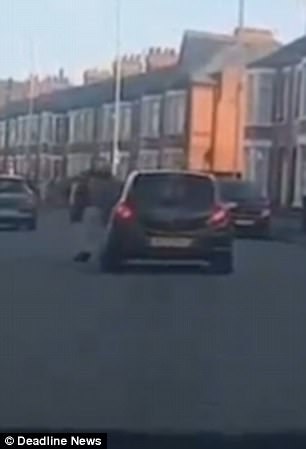 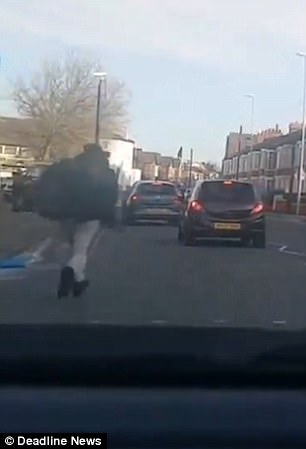 The man launched his attack after the driver was forced into an emergency stop to avoid hitting him (shown left), causing the pedestrian to then chase after the car (right)

The incident happened during the day on December 31 but the man who filmed it has just released the footage, claiming police failed to take any action.

Rashid Khan’s footage shows a black Vauxhall Corsa in front slamming on the brakes to avoid hitting a middle-aged man who wandered in the middle of a road.

The man, wearing a long coat and tight Adidas joggers can be seen staring into the passenger window at the driver after avoiding the car by inches.

He then furiously pulls at the door handle trying to reach the driver before launching his fist through the open window and attacking the driver.

The driver’s head snaps sharply to the left, suggesting he has been hit with considerable force.

A silver car is then shown narrowly avoiding hitting the Corsa head on while the pedestrian continues to run after the car.

A woman with a young child are seen just feet away watching the ugly scene unfold. 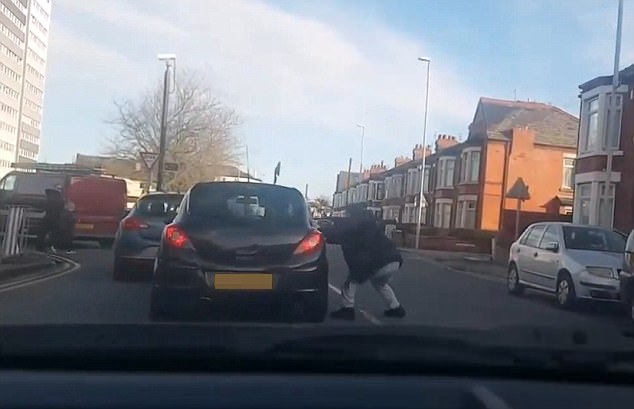 After catching up with the vehicle after it gets stuck in a line of traffic, the pedestrian tries to open the car door 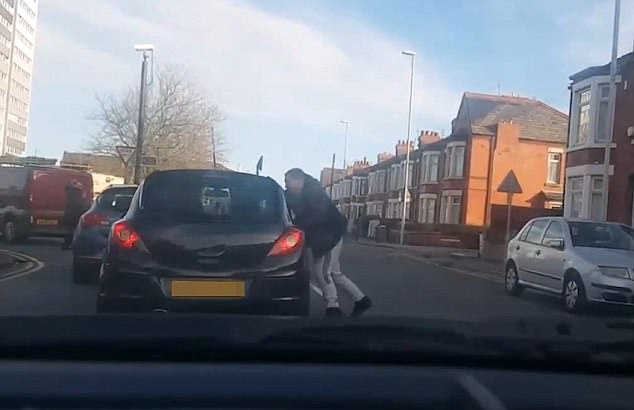 Having failed to open the car door, the angry pedestrian throws a vicious punch at the driver through the car window

The attacker is then shown casually walking away while apparently inspecting his hand for damage.Rashid Khan uploaded the footage with the comment: ‘Welcome to Liverpool’.One viewer wrote: ‘Pedestrian is a scumbag and is at fault.’

Another said: ‘What a total scumbag. The guy was being deliberately slow and obstructive. Arrogant scumbag – we’ve all seen them.’

One social media user wrote: ‘I’ve seen that run before…normally they are running away from a car and there are sirens are going.’

And another joked: ‘He isn’t good enough to be a scumbag, he is a f***ed up waste of dead sperm and needs cement boots and a nice deep river.’

Rashid said: ‘I feel sorry for the car driver. I did report it to police but they said they will be in touch with me but nothing so far.

‘I told them I had video but they did not call.’ 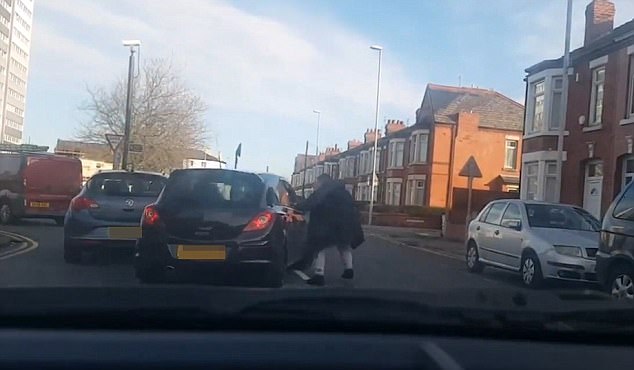 Desperate to escape, the driver pulls out of a line of traffic and speeds down the wrong side of the road and across a roundabout

Watch: Police watchdog finds officer used ‘unnecessary force’ on man in custody in this incident The IPCC said a https://is.gd/htLWnd

A police lieutenant in Georgia caught on dashcam telling a https://is.gd/mxSKJf

Girl, 17, ‘was drugged and seriously sexually assaulted as THREE different men attacked her in one hour as she https://is.gd/DlLasw