A teenage thug who stabbed two people with a nine-inch hunting knife during a mass water fight was jailed for 14 years today.

Joshua Clements, 19, carried out the knife rampage while wearing a camouflage mask in front of horrified onlookers in Hyde Park, London.

He stabbed and slashed at walking stick-user Audean Thomson and Duane Williams, both 20, leaving them seriously injured.

Promising footballer Mr Williams used to be on the books of League One club AFC Wimbledon.

Thousands had gathered in the park for a water fight on July 19 last year, one of the hottest days of the summer.

But the unscheduled event descended into violence as darkness fell.

Police wearing riot gear were pelted with bottles as they tried to disperse the 4,000-strong crowd.

Clements, who turned up with friends planning to rob revellers, admitted carrying out the knife rampage and was jailed at the Old Bailey.

The court heard Mr Thomson was vulnerable, while Mr Williams had been left depressed as his promising football career ‘put on hold’ as a result of his injuries.

‘It was dark, there was a large and noisy crowd, and a large open space to which this defendant and his group could melt away.’

Referring to the attack on Mr Williams, the Judge said: ‘This was a random, motiveless attack upon a wholly innocent young man with a knife that was then used to attack another.

‘His body will carry a scar for many years if not the rest of his life.

‘His football ambitions had to be put on hold and he became depressed.’

Turning to the attack on Mr Thomson, he said: ‘It is a truly terrifying, sickening event to watch.

‘These were vicious attacks on two unarmed, entirely innocent victims. 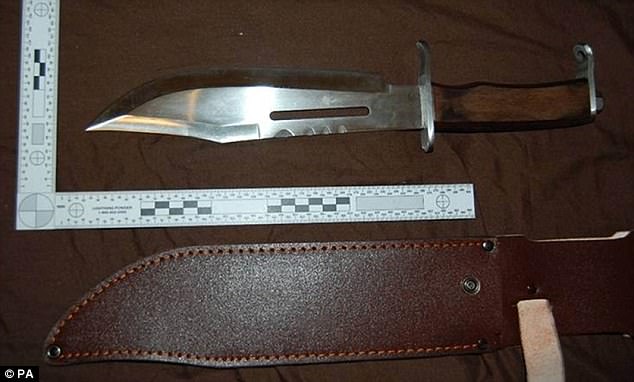 This is the hunting knife Clements used in the attack, after turning up in Hyde Park, London, with knife-wielding friends to rob people

‘One of whom was vulnerable, who I have no doubt was targeted for that very reason.

‘Fuelled by both drink and drugs, having brutally and in front of witnesses stabbed him several times.

‘You had already stabbed another victim when you found him at a completely different part of the park. You stabbed him, not even making any attempt to rob him.’

Clements, of East Acton, west London didn’t react to his sentencing as he was also handed a five-year extended licence.

Mr Williams was attacked near the boating lake by Clements, who shouted ‘what what’, before pulling the knife from the waist of his trousers and stabbing him in the abdomen.

He was left with his bowel lining protruding through his outer skin and required 18 stitches for the 3cm wound. 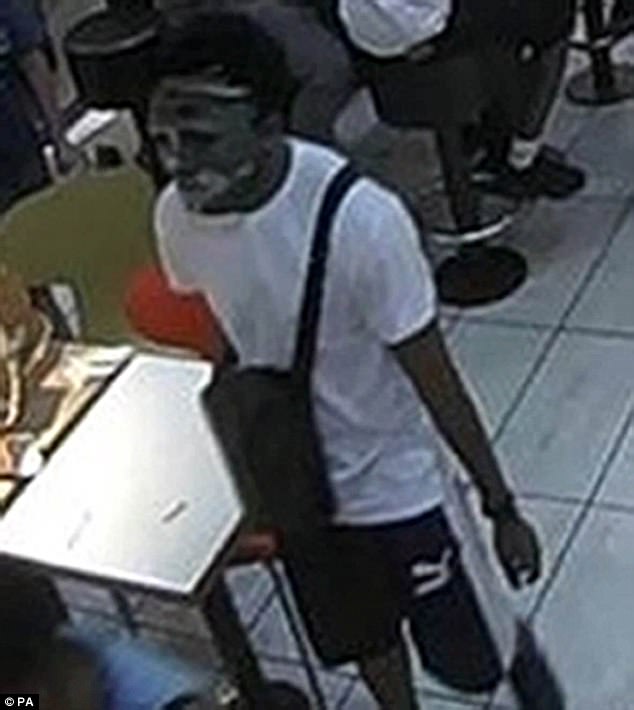 Later, as Mr Thomson approached an exit by Cumberland Gate, he was separated from his friends, and was surrounded by four men wielding knives.

He dropped his walking stick and fell to the ground as he tried to back away.

Clements then stabbed him repeatedly in the leg and chest.

Linda Strudwick, prosecuting, said: ‘He could hear a male voice saying, “dip him dip him” – meaning stab him. 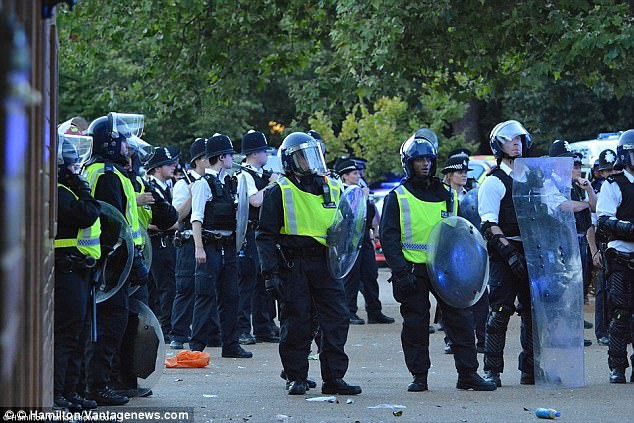 A crowd of 4,000 had gathered for a water fight in Hyde Park but riot police had to be called

‘He stabbed and slashed. It is chilling to see.’

Clements casually strolled to a nearby McDonald’s after carrying out the attack.

Mr Thomson was taken to hospital soaked in blood, and found to have a 4cm wound to the chest, but has since recovered.

Mr Williams said in a victim statement that he’d been working as a model before scars from the attack stopped him.

The attack also robbed him of an opportunity to play for Dulwich Hamlet.

Ms Strudwick said: ‘That line of work is now no longer open to him.

‘It has also deeply affected other parts of his life because he played a lot of football, and he trained quite hard.

‘His football career has been put on hold.’ 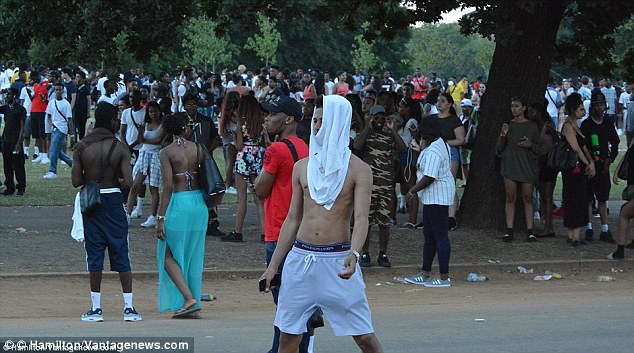 Police were called in to stop rioting, which broke out after a mass water fight was organised

Bromley FC also wanted him to do pre season training, and he previously played for Wimbledon AFC.

In a statement, Mr Thomson said: ‘I couldn’t move around at all. I would normally hop around. When I hopped I was caused a great deal of pain.

‘I find it difficult to go out, and haven’t been on a bus at all since the incident. I am always concerned what people are saying and thinking.

‘My mum is really worried the whole time. She is worried when I go anywhere.’

Police traced Clements on CCTV, and spread an image of his face which was recognised by a gangs specialist. He was arrested days later. 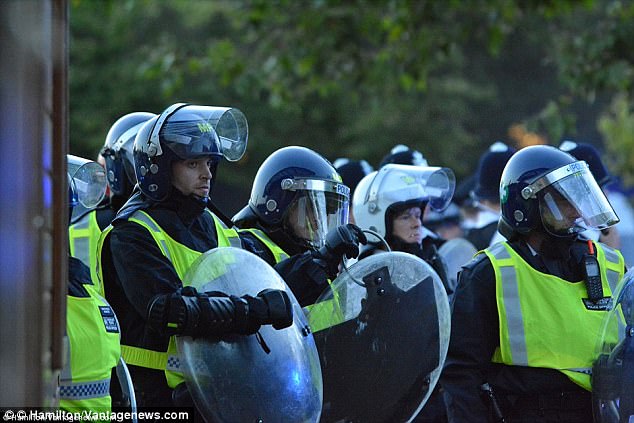 The knife was seized at his home which still had the victims’ blood on.

He was initially charged with the attempted murder of Mr Thomson – but prosecutors accepted the lesser plea. 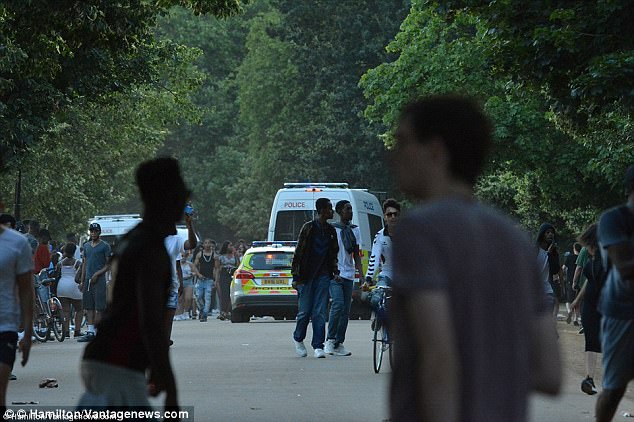 Sentencing was delayed for psychiatric reasons, but it was eventually ruled he was not suffering from any mental illness.

The court heard Clements has 11 previous convictions for 18 offences, dating back to when he was 13 for robbery.

He was released from Feltham Young Offenders’ Institute in May last year for a conviction for possession of a knife and a public order offence.

Clements was on a detention and training order for a knife conviction which expired on July 20 2016 – the day after the attacks.

In mitigation, Jacqueline Nuth, defending, said: ‘He has shown some remorse for his actions.

‘The person before you today is a different person to the person who committed these offences.’

‘He is a violent individual who targeted two innocent people for no reason, thinking he could evade justice in the crowd.

‘His victims sustained very serious injuries and I am pleased that despite his attempts to delay the judicial process, he has now received this substantial sentence.’