Police have made an arrest after an armed man was seen walking around Manchester city centre with a crossbow and a knife.

Officers swooped on Great Ancoats Street at around 2.30pm today.

A man was detained and arrested and police used a Taser as they attempted to detain the man.

Posts on social media also appear to show the arrest of a man.

A GMP spokesman said: “Shortly after 2.30pm police were called to Tib Street in Manchester City Centre to reports that a man was walking around with a large crossbow and a knife.

“Armed officers attended and a 30-year-old man was arrested on suspicion of carrying offensive weapons.

“During the incident the man suffered an injury to his hand. He has been taken to hospital for treatment.

“A police cordon has now been put in place around a bag that the man was carrying.

“During the detainment, a Taser and a baton launcher was used by officers. As is standard practice, an automatic referral to GMP’s Professional Standards Branch and the IPCC has been made.”

We’ll bring you updates as we get them

More images here of the moment the man from arrested, courtesy of reader Jack Wiseman:

We’re building up a picture of the suspect’s movements this afternoon:

Church Street: At about 2pm, the man entered Ridelow on Church Street and allegedly cut the crossbow off the wall with a knife. He then stole the crossbow and was chased out of the shop by general manager Zeeshan Saddiquei. He then reportedly turned to the manager and threatened to stab him with a knife, before running away.

Tib Street: Police first received reports from people who had seen the man on Tib Street.

Oldham Street: He was seen fleeing down Oldham Street and heading towards Lever Street where he reportedly got onto a bus at traffic lights. He was pushed off the bus by a passenger, before he was seen trying to get into a silver car.

This extraordinary picture posted on Twitter by David Wolfenden shows a man walking along Oldham Street in the direction of Great Ancoats Street, carrying a bag and what appears to be a crossbow on his back.

Panic and fear as man armed with crossbow got on bus

A woman, who does not wish to be named, was on the 76 bus from Piccadilly to Oldham when the bus stopped at traffic lights on Lever Street.

She heard screaming and shouting as the man, armed with a crossbow, got on the bus via the emergency exit as it was sat at the traffic lights outside Brook Manchester.

She feared for her nine-year-old daughter’s safety as she sat just inches away from the armed man.

“The crossbow was massive, I’ve never seen anything like it. He didn’t say anything and seemed really calm. I was scared he might take my daughter hostage. It was like everything was in slow motion.

“The door was still open, and a man then pushed him off the bus. “I ran to the back of the bus, and saw he tried to get in a silver car.

“I was crying, telling the bus driver to keep going.”

What we know so far

A shop manager has told the M.E.N. that the suspect stole the crossbow from his store and threatened him with it shortly before the police were alerted.

“The man came in and I said ‘hi’, but he ignored me. He looked at the crossbow and started touching it. I didn’t feel right watching him. I called to my colleague to come down.

“The crossbow was cable-tied to the wall and the man, who was wearing a mask, then took his knife out and cut it off.

“He then came to me and asked where the bows were. I said I didn’t know if I had them. He started walking out the shop and I said ‘you can’t walk around with that’. I said ‘you can’t go’. He showed me his knife. He then walked out and I followed him.

“I chased after him, then he turned round and came towards me. He said ‘f*** off I will stab you, I will come to you.’

“His knife fell out of his pocket, then he picked it up, he said ‘don’t follow me’. Then he walked away and I started following him again – I didn’t want to let him go. I wanted the police to catch him. Sometimes you don’t think. This man had a knife and a crossbow.

“I was on the phone to police for about ten minutes. I lost him when he went down Oldham Street, and police told me they found him.”

Police can be seen here removing a weapon from the scene on Great Ancoats Street.

This is the dramatic moment that police surround the man suspected of carrying a crossbow and knife, then deploy their Tasers to apprehend him.

THIS WAS THE MOMENT POLICE TASERED A CROSSBOW-WIELDING MAN

Update from GMP: Cordon placed around bag carried by man

“Shortly after 2.30pm police were called to Tib Street in Manchester City Centre to reports that a man was walking around with a large crossbow and a knife.

“Armed officers attended and a 30-year-old man was arrested on suspicion of carrying offensive weapons.

“During the incident the man suffered an injury to his hand. He has been taken to hospital for treatment.

“A police cordon has now been put in place around a bag that the man was carrying.

“During the detainment, a Taser and a baton launcher was used by officers. As is standard practice, an automatic referral to GMP’s Professional Standards Branch and the IPCC has been made.”

Armed police ‘ran out of vehicles’ to detain man

Witnesses say armed police jumped out of their vehicles near Tib St and ran after the man. A police dog was used to detain him.

There was a struggle between police and the offender.

Traffic being directed away from Great Ancoats Street on eastbound carriageway and causing a lot of disruption. Avoid this route.

Eyewitness account from Keith Marland who was driving past.

“I saw armed police driving past, then about six or seven police Range Rovers went passed. A few of them then jumped out of the cars. The man with a crossbow was running towards us, a police dog brought him to the ground, but he got up again and the police dog was hanging onto his arm.

“He walked to the other side of the road. He walked into the front of a police car but carried on.

“The man was then Tasered, then I heard a bang and he fell to the floor. Police then disarmed him of his cross bow and took his mask off.

“They were shouting for everyone to move away.”

Here are armed police moving the weapon from the pavement.

When I checked with police earlier they said no-one was hurt during the incident.

One eyewitness told the M.E.N that he saw armed police and scores of police cars, some of which were unmarked, in the area as the man was being detained.

He described seeing ‘scared’ families running away from the scene.

Great Ancoats Street is still blocked off by police in the east direction.

This is the crossbow the now-detained man was carrying at the time, witnesses said. 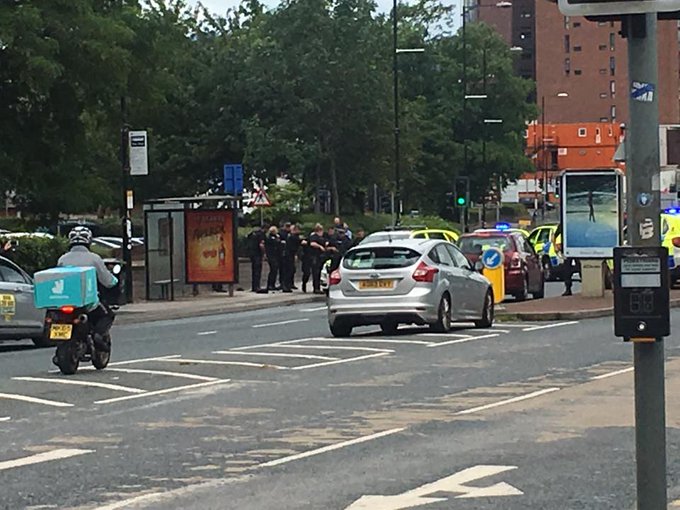 Man taken down by police on Great Ancoats Street

We’re told that police officers converged in large numbers on Great Ancoats Street following reports that a man had been seen carrying a crossbow and a knife through the Northern Quarter a short time ago.

Images on social media show a man being apprehended by police and put into a GMP vehicle.

UK CCTV services The premier CCTV service of the UK contact us : 0800 288 4761 ukcctvservices@gmail.com

Police issue image of man they want to speak to in connection with reported rape in Manchester city centre Police https://is.gd/KG25Au

A manhunt is underway for a passenger who https://is.gd/V3ZEAl

Open chat
1
Hi welcome to
Whatsapp chat how can we help?
Powered by