A moped gang which dumped a ‘stolen’ bike in the middle of traffic before driving the wrong way up a busy street as they tried to escape what they thought was a police siren – but was actually an ambulance – has been filmed and shared with the MailOnline.

Dashcam footage of a Hatzola ambulance volunteer in Stamford Hill, London captures the moment gang members abandon a moped when they thought they were chased by undercover police but it was actually a Hatzola volunteer on emergency call.

In the video, a siren can be heard as the ambulance weaves through traffic.

The mopeds pass between cars just ahead, clearly believing that the sirens are following them.

Suddenly, one person jumps off a bike and lets it crash to the ground in the middle of traffic.

The unnamed rider, a helmet and visor obscuring their face, then jumps onto the back of another bike and they brazenly drive up the road in the wrong direction, towards the siren and past the ambulance.

They presumably banked on the fact that the ‘police car’ could not turn so easily amid traffic and would be unable to follow in the wrong direction up the road. 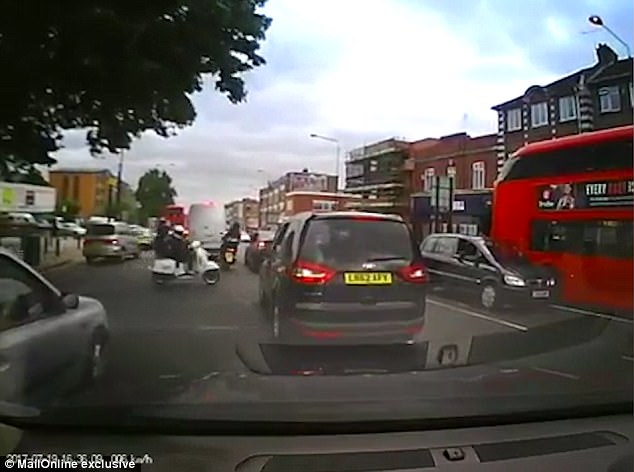 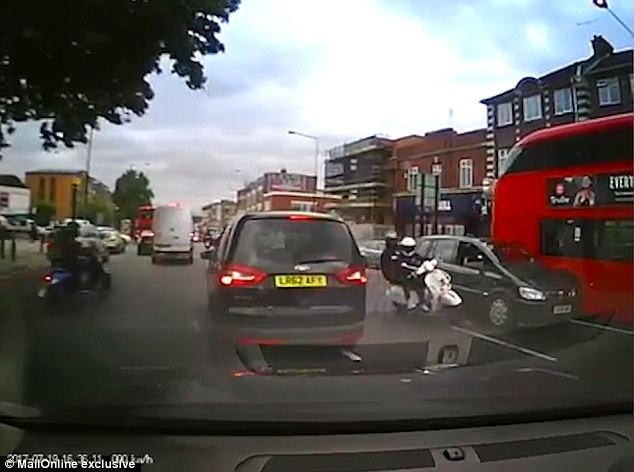 A witness who wished to remain anonymous but who supplied the video footage to MailOnline said that the incident illustrates how many moped gangs now operate in north London.

‘My mother was almost mugged in the street yesterday near Stamford Hill. She just got out of a car when a three mopeds came up, the drivers were shouting to disorientate her and one tried to grab her handbag.

The Hatzola North London, which filmed the footage of the moped gang in Stamford Hill is a free volunteer ambulance team which responds to medical emergencies and casualty incidents in the community 24 hours a day, seven days a week.

It aims to provide medical treatment within minutes of a call, and to save thousands of lives each year.

Hatzola also provides specialised medical care and ongoing support for people in the community challenged by ill-health, disability, chronic medical conditions, mental health issues, as well as the elderly population, to enhance the quality of life for vulnerable groups.

‘Luckily she was aware that this could happen and she managed to escape but you just have to be so vigilant now.

‘I don’t even take my phone out on the street anymore because bike gangs sometimes mount the pavement and snatch the phone out of your hand,’ he said.

These latest examples of moped gangs operating in London are disquieting reminders of the recent crime epidemic caused by bike gangs although there is currently no evidence that the gangs are linked.

Just this week, police busted what they say was one of London’s most prolific moped gangs responsible for 103 offences in 18 days.

The teenage offenders – aged 15, 16 and 17 – grabbed phones from pedestrians in Westminster, Camden, Islington, and Kensington and Chelsea during their crime spree.

Police said that there had been a palpable decrease in moped gang related crimes since this particular group had been disbanded.

Last Thursday, UberEats and Deliveroo drivers were specifically targeted for their mopeds in a spate of horrific acid attacks across north and east London.

One rider was attacked and robbed while another man was heard ‘screaming in agony’ after suffering catastrophic injuries when doused with flesh-burning liquid.

Another victim who also had his moped stolen was filmed having litres of water poured over his face by police to wash acid from his eyes by the side of the road in Hackney.

The two-man gang went on a rampage across east London as they sprayed five men between 10.25pm and 11.37pm in Stoke Newington, Hackney and Islington.

Two teenagers aged 15 and 16 were arrested over the incident.

Earlier this month, a car driver was robbed at knifepoint in broad daylight by a gang of thieves on mopeds.

The incident took place on Ladywell Road in Lewisham, London, on July 6, and was caught on dashcam from a car behind.