A manhunt has been launched for two blade-wielding thieves who forced their way into a woman’s east London home and held her at knifepoint.

The victim, aged in her 50s, was at home alone when she was tricked into answering her front door by a woman smiling and waving at her from her doorstep.

Two men then burst into her address, in Barkingside, knocking her to the ground as they forced their way inside on Sunday, April 30.

One of the suspects put his foot on the woman’s side, holding her at knifepoint while he asked her where she kept her cash. 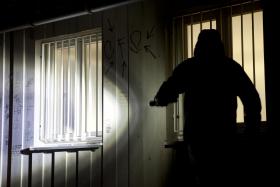 Hunt for burglar with knife creeping into sleeping victims’ bedrooms

While carrying out the burglary, which reportedly lasted 30 minutes, the victim said the suspects spoke to each other in a foreign language.

Detectives have released e-fit images of the suspects following the aggravated burglary in Stradbroke Grove.

The first suspect is described as a white man, aged about 40 to 42, thin and tall.

The victim described his appearance as “strange” because his jacket looked too small and he looked dirty.

He had dark coloured hair cut with a short back and sides. Police said it was spiky on top with dyed blonde tips.

The second suspect was described as short and fat, aged over 45, wearing a grey Nike tracksuit. He had a missing front tooth.

He was also dirty looking and had an east European accent, Scotland Yard said.

The woman who knocked on the victim’s door before the raid was described as aged in her 30s and having shoulder length brown hair with olive skin.

She was wearing a long cardigan over a shirt.

DC Richard Draper, the investigating officer from the East Area Command Unit CID, said: “This was a planned and violent attack that left the victim bruised and very distressed.

“The two e-fits are thought to be very accurate and if you know or recognise these men call police immediately.”