Hackney burglaries: Manhunt for knifeman creeping into victims’ bedrooms in string of five terrifying night raids in one week

A manhunt has been launched for a knife-wielding thief who crept in to victims’ bedrooms while they slept in a string of frightening burglaries in north-east London.

The brazen burglar shone torches in his victims’ faces only for them to wake up and see him standing over their bed before fleeing with expensive items.

In one of the raids, a young woman was woken up by a man standing over her unplugging her mobile phone from its charger.

have warned recent soaring temperatures have led to a spike in burglaries, with this suspect is alleged to have ransacked five homes in Hackney in one week.

On Tuesday, a woman in her 50s was woken by her dog barking before she found the man in her living room in Brooke Road, Stoke Newington. She confronted him before he revealed a blade.

The victim’s son then woke up amid the commotion and intervened to protect his mother before the burglar escaped from a window with expensive personal items at about 4.30am.

Less than an hour later at a nearby address, the man invaded the home of a woman in her 20s who was woken by the burglar disconnecting her mobile.

She screamed before he jumped out of a bay window in her home in Millfields Road, Lower Clapton.

The suspect was then seen escaping the scene on a black bicycle, heading towards Clapton Pond shortly after 5.20am. 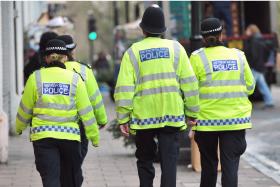 The following day another victim, a woman in her 30s, was in bed when the suspect shone a torch into her face before attempting to grab her phone from her hand.

He failed, but escaped from the home in Hassett Road, near Homerton station, with cash and two laptops at about 10.40pm.

The suspect is also thought to have disturbed a sleeping man in his 20s while ransacking his living room of his home in Killowenon Road, south Hackney, Friday, June 16.

The homeowner shouted and the suspect escaped through a window with a MacBook laptop, taken from the man’s bedroom while he slept, and an iPhone.

Again on Thursday, June 22, a man was woken by the sound of someone placing a ladder taken from a nearby home against his house at about 4.30am.

He challenged the suspect who denied any wrongdoing and fled the address in Cecilia Road, Dalston.

Met Police Detective Inspector Paul Ridley, who is leading the investigation by Hackney CID, said: “These burglaries are particularly striking as the suspect demonstrates no restraint, despite the considerable risk of being disturbed. Many burglars do not enter people’s homes during the night due to this fear. I am wholly concerned by the suspect’s behavior given his possession of a knife and creeping into bedrooms. 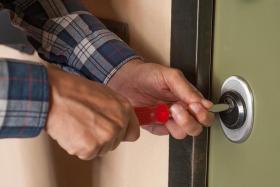 Each London area ranked by burglary risk – with surprising results

“The recent hot weather has led to a spike in these offences. I would urge residents to remember to keep their windows closed or fit window restrictors and screw locks.

“The victims can understandably feel afraid and violated after being confronted, and their homes invaded. It is imperative that we catch this man before he targets anyone else. I would urge any members of the public with information to contact my investigation team.

“You may have noticed a man matching this description loitering around in the area. If that is the case, then please call us immediately, every line of enquiry will be rigorously pursued.

“I can assure residents that all officers in the borough have been briefed about these series of offences and will respond to your calls. My investigation team are working tirelessly to identify this man. Please ensure that you remain vigilant and follow the crime prevention advice.”